skip to main | skip to sidebar

Hello all my fabulous readers!
I have finally made the switch from blogger to wordpress.
Please find my blog now located at:
http://gumboglam.wordpress.com

Thanks for reading and I love you all!
Posted by SugarKane Gumbo at 8:29 PM No comments:

Once Upon A Time (A Story of Marly) 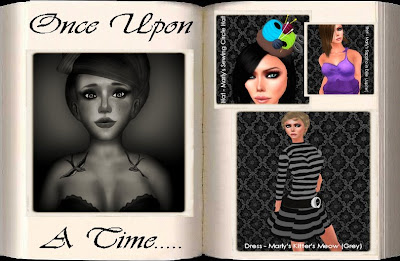 Once Upon A Time in a small town called Pleasantville in the land of Polly Jean their lived a girl named Marleen Vaughan. Marleen was not what the townspeople had come to know her by, and in fact, everyone called her Marly.
Marly was a friendly girl. She was constantly surrounded by people who had come to love her. The ones that did know her and love her were always guaranted a wonderful time of laughs, sincerity, and compassion with a little sprinkle of vulgarity mixed in. Time with Marly was always a good time had by all.
But, this isn't a story about how Marly was a great person, or great friend; in fact, this girl named Marly had a special talent. Marly's talent made her famous in the world of Second.
Marly made the world beautiful by designing things for all the inhabitants to wear, and wear them proudly they did. Marly had so many love her designs that she opened a shop called Marly's. From that day, all could come and enjoy her creativity and designs.
Marly was a lovely girl, but in fact like so many in the world was what some might call strange. ,To yours truly's surprise, Marly would never allow compliments from her friends and loved ones about her amazing talents. And so, it was on one beautiful Sunday that someone named SugarKane set out to tell the story of Marly. I beautiful story of talent and friendship to last through the ages, and be told across the lands...
Picture of Marly (Stolen from her flickr without permission) :)
Look 1 -
Hat - Marly's - The Sewing Circle Hat -
Hair - Detour - Bob III - Black
Look 2 -
Shirt - Marly's - Sappho in Exile (Jupiter)
Hair - Maitreya - River II - Caramel
Look 3 -
Dress - Marly's - The Kitter's Meow (Grey)
Hair - ETD - Flapper (Dirty)
In Every Look:
Skin - :GP: Sundust [Light] Vixen-Merlot 1
Eyes - booN - tsubura eyes (steelblue)
Eyelashes - Cake - Bedroom Lashes
Posted by SugarKane Gumbo at 12:55 PM No comments: 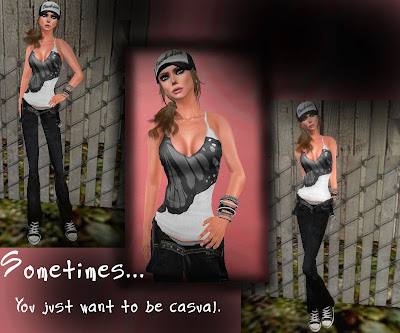 One of my most casual outfits to date, which is usually just not my style. But, for some reason I thought that my SL style should reflect my RL style this weekend. No worries, I buttoned up my pants in RL before any hiking happened on the trails. Sorry Ya'll that's all you get, cause I am T-I-R-E-D! Look below for the info. These designers are fab and for real deserve your L$...
Shirt - [LeLutka] - Tank Top 3/White
Pants - *COCO* - LooseStyleDenim (OxfordBlue)
Shoes - PornStar - Xtra Hi-Tops MultiColor v2
Bracelet - Sn@tch - No. 9 Bracelets (Skulls & Metal)
Hair/Hat - *ARGRACE* - Baseball Cap -Relaxed ponytail -Lightbrown
Eyes - booN - tsubura eyes (steelblue)
Skin - :GP: Sundust [Light] Vixen-Merlot 1
Posted by SugarKane Gumbo at 12:34 PM No comments:

Super Special Fantastic Fabulous Thanks to Marleen Vaughan for creating this Amazing Hot Blog Header! I am so grateful for having such a creative, talented and helpful friend.

Posted by SugarKane Gumbo at 12:03 AM No comments: 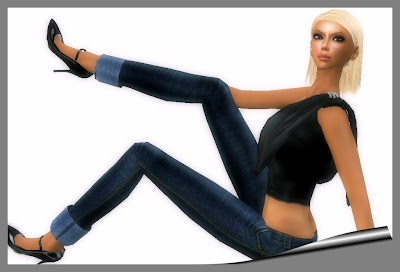 *Review* CURIO SKINS...and I am showing off this skin! 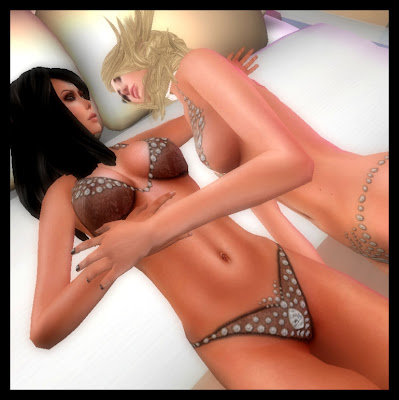 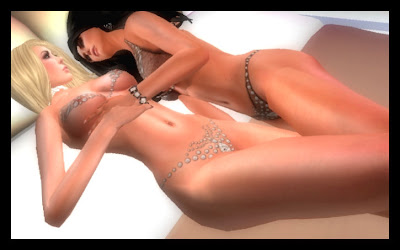 Me and my good friend Lourdes decided to remove the clothing and show off the new curio skins the sexiest way we knew how. The Vixen skins are my absolute favorite, and many thanks to Gala for passing them my way. Simply beautiful... And special thanks to Marleen Vaughan for letting us use her bed (even though she didn't know at the time) :)
The bikinis are from Meghindo's and are about as sex as you can get.
Posted by SugarKane Gumbo at 10:02 PM 1 comment:

On my way to someplace cool... 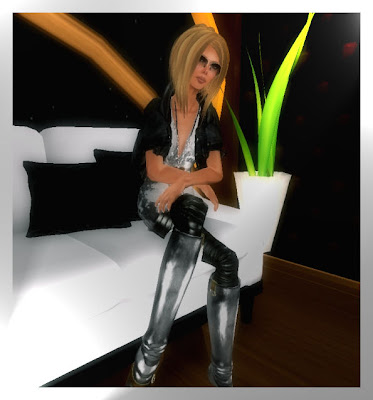 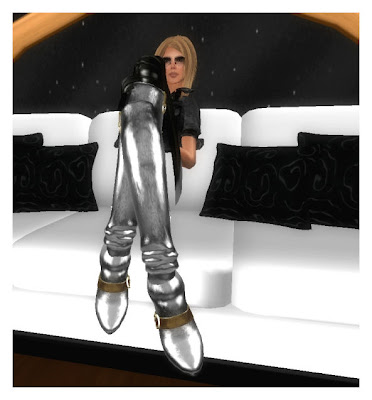 I can't even begin to say how cool I feel in this little number! (and believe me, I am not cool...)
You'll probably see me wearing this outfit again, since I just love it so much! The Aoharu jacket is fabulous, lots of these jean jackets are showing up on the grid and this one is one of my favorites. Pacadi glasses were a gift and I can't seem to take them off. I feel tough and rock n roll. (whatever that feels like) The boots are from a store called R2 that I stumbled into and they are great! Terrific quality and style and I feel oh so 80s!
Jacket - AOHARU ShortJeanJacket_Black
Outfit - *Little fish* Roses & Guns Fashion Dress
Glasses - [PACADI] - Designer Aviator Glasses [silver]
Necklace - EARTHTONES- Heartwood Necklace Silver
Boots - R2 "Ehako" Silver
Hair - Exile - Kara sand
Skin - :GP: (Curio) Sundust [Light] Vixen-Mink 1
Posted by SugarKane Gumbo at 9:19 PM No comments:

SugarKane Gumbo
The fabulous fashion finds of SugarKane Gumbo through her escapades in Second Life®. I try to have a quirky yet fashionable style and I strive to only blog high quality and unique items that I love!